This necklace was commissioned from Etsy seller Dharlee. The designer notes, “I was commissioned by ABC television to make a necklace for the character Josslyn Carver who was played by actress Jes Macallan. The necklace shown is the original one worn by the actress that is shown in the first 4 photographs. It says Fabulous, and it is. If you would like your own Fabulous necklace, you may order it in this listing. Or if you prefer another word or a name, let me know in the message to seller field upon purchase. (Up to nine characters)

I need to know the proper spelling of the name or word including capital lettering in it’s proper place. Please understand that I generally do not make a name with all capital lettering. They don’t generally work out as well that way. It “can” be done, but if you want this please send me a convo prior to purchase to discuss it. If you show me the name in all caps, I will capitalize the first letter only and make it with the rest lowercase by default unless you convo me.”

So originally a one-off, you can now be fabulous too, for USD$25 for silver plate and slightly higher for other metals. 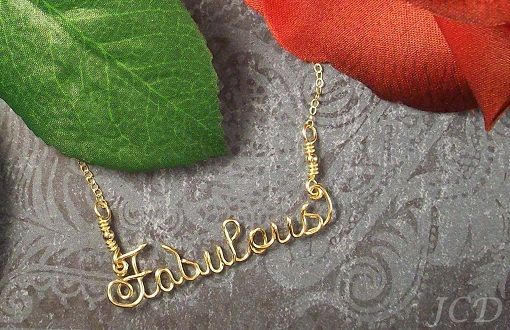 One thought on “Jewel of the day: Dharlee Josslyn Carver Fabulous Necklace”